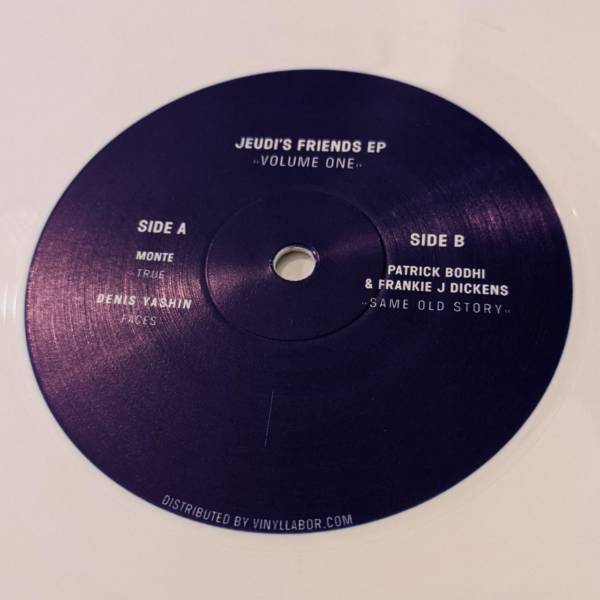 With the 4th release JEUDI Records is proud to open a new chapter in their history:
The JEUDIʼs friends series Volume one is inviting three exquisite guests to our family
around Adana Twins, Doctor Dru & Davidé.

True travels you back to the “Beverly Hills Cop” and “Miami Vice” soundish world but
with a deep and solid funk groove behind it. This piece already made the dancefloors
happy and is a sureshot floor filler.

Monte is an absolute synth freak who can make you any sound you could think of almost in seconds. No, seriously. Plus he is a very talented drummer, too. So you can imagine where his slick funkiness is coming from. Be aware of upcoming productions of this special JEUDI Records friend based in Hamburg, Germany.

Faces is binding the world of technoish, oldschoolish house grooves with a deep true
bassline. The dark vocals are bringing the british 80ʼs flavour to this hypnotic piece.

Denis Yashin the versatile talent coming from the wide lands of Siberia to Vienna,
Austria is a very reflected, thoughtful guy when it comes to production. Influenced by
Detroit Techno and experimental electronic music he has developed his own, unique
soundscape.

Same Old Story is a huge deep disco house edit of a so called classic. We couldnʼt resist signing this wonderful peace leaving you with pure happiness.

Patrick Bodhi and Frankie J Dickens brewed from the cultural boiling pot known
as London, these guys have been reared on a wide range of genres and the scenes
that inherently emerged and evolved with them. “Same Old Story” represents their way
of telling the deep disco story.